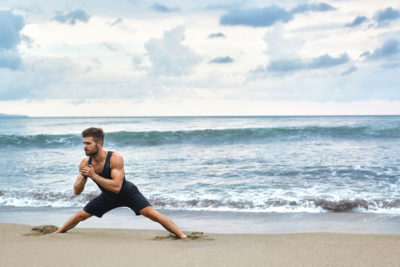 The emergence of yoga

Yoga originated in the cultural space of today’s India. Its history goes back several millennia. The development of the art of movement was closely interwoven with Buddhist and Hindu thought. While traditionally meditation and spirituality have played a major role in yoga practice, the physical side is now the focus of Western culture. This is the so-called Hatha Yoga. Within physical yoga, different types of yoga are differentiated, which differ, for example, in their dynamics. It is thus possible to practice the postures of yoga (also called asanas) rather statically (Hatha) or to connect them through dynamic, flowing movements (for example in Vinyasa-Flow Yoga). The highest possible dynamic is achieved in Ashtanga yoga, where the practitioner performs a fixed sequence of postures more or less in constant motion. At Royal Private Coach you will find all kinds of Yoga styles as Private Training in London

The emergence of Pilates

This movement type was in the beginning of the 20.  Century by Joseph Hubert Pilates, a German -born American, developed. His first studio was in New York’s Urban Ballet Building, which explains that many dancers still use this workout to enhance and maintain their fitness. The workout is physical, non-dogmatic and focuses on strengthening the trunk and strengthening the abdominal muscles. In doing so, it places a special focus on the activation of the deep muscles that are little used in everyday life.

Yoga and Pilates, despite all the differences, have some similarities that make a combination of the two workouts quite sensible. The conscious breathing plays a decisive role here. In the practice of both forms of movement, great emphasis is placed on breathing, which is in tune with the movements performed and supports the activity of the muscles. In yoga, there is also the so-called pranayama, which focuses exclusively on the application of breathing techniques and can be incorporated into the yoga practice.

In addition, both sports lead by their physiologically meaningful movements both to strengthen and define the muscles as well as to improve flexibility and thus make an important contribution to health.

Benefit from a combined workout – Health and Yoga London

In today’s hectic times, we are constantly under tension. Whether at work or in private life, there is always something to do. Thus, hours in which we can devote ourselves to our body become more and more valuable. A suitable workout supports the work-life balance and is good for the health.

Concentrating on breathing helps to find oneself and to feel relaxation. At the same time strong demanding postures strengthen the musculature and increase the general fitness. The associated trunk strengthening protects against back pain. Targeted exercises for certain muscle groups also promote the definition of the muscles and thus have the pleasant side effect that the body optics is improved!

The increase in flexibility helps to carry out important movements in everyday life correctly and protects against injuries that are favored by the shortening of the muscles. Last but not least, a workout that tightens tension and relaxation helps to make you feel good after a workout and helps you to find your personal Work Life Balance. You can have a look at our Personal Trainer Team in London and find the right Coach.